So much of 1999 was about mourning the loss of my grandmother and building up to 2000. In 1999, my aunt, a strong Pentecostal woman, offered to do a bible study with some family members, she drove from Milwaukee to Chicago each week to lead the bible study. I decided that this was a good opportunity to hang out with some of my favorite people. I showed up with my catholic bible and my catholic education, after all I went to a catholic grammar school and a catholic high school. I thought, I know the bible, what is she going to teach me? It turned out, I did not know much about the bible or about being catholic. I learned so much from her and about the other women in the bible study.

At the end of 1999, my Pentecostal aunt suggested that we visit a non-catholic church for Christmas. For me as a Mexican-american, being catholic was a part of my DNA and attending a non-catholic church was was a major no-no. But I had learned to trust her, so we went to a church that a friend of mine was the drummer. I enjoyed the service and wanted to return.

Shaggy and I began attending the new church regularly. It was a charismatic church with a latino flare and made up of mostly people in their 20s and 30s and we loved it! It was at that church that we committed our lives to Christ, we recommitted ourselves to our marriage and committed ourselves to ministry. It was completely life changing. We were on fire for Jesus and nothing stopped us! We were baptized that summer.

I soon began volunteering at the church and was later hired. I had no office experience but I had a willing spirit and a knack for organizing things and people.

We learned so much about ourselves and about each other. We saw examples of great marriages and began laying the biblical foundation for our own marriage. 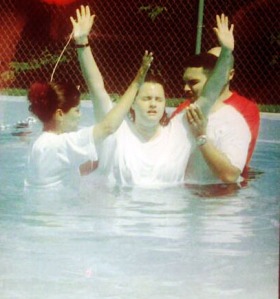